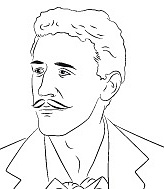 Mackintosh formed, together with his wife Margaret McDonald Mackintosh, her sister Frances MacDonald McNair and James Herbert McNair the group "The Four", which was particularly influential on the Glasgow School.

In the late 19th century he was one of the leading figures in the Art Nouveau movement. He gave a decisive impetus to the modern design and is a forerunner of Modern Art. 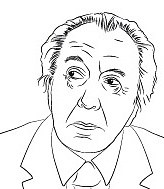 He began his studies in 1885 at the University of Wisconsin, but left this in 1887 without completing.

From this time to the year 1893, he worked for Lyman Silsbee in Chicago and for Dankmar Adler and Louis Sullivan. After this experience, he started his own company in his new home Oak Park.

By 1910, he realized primarily Prairie Houses, for the movement he, Burley Griffin and Marion Mahony Griffin was largely responsible. 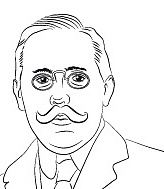 Hoffman came from a wealthy and political family (his father was the mayor of the district of Jihlava Pirnitz). Originally he should follow the footsteps of his father, but his passion was the art.

Hoffmann studied at the Academy of Fine Arts in Vienna with Karl Freiherr von Hasenauer and Otto Wagner. At the conclusion of his studies he was awarded the Prix de Rome, which meant that he then spent a year in Italy. The purist forms of the houses with their flat roofs and facades straight probably inspired his cubist style. 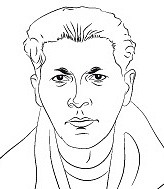 Gerrit Thomas Rietveld (1888-1964) was a Dutch architect and designer. He became famous for his participation in the artist group De Stijl.

Rietveld started his career as a carpenter. He gained architectural knowledge through evening classes.

The artist group De Stijl was formed by an eponymous Dutch Journal of Visual Arts, edited by Theo van Doesburg and published between 1917 and 1932. Rietveld gained success through his Rietveld Schröder House (Utrecht) and the red and blue chair of 1918. Even at the Bauhaus, his ideas were taken up.

Some of the defining features of his work are the geometric shapes and a reduction to the primary colors yellow, red and blue. They are meant as an attempt to bring together visual arts, design and architecture. 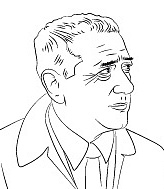 Marcel Breuer was a German-American architect and designer of Jewish origin.

His best known works are the steel chair B3 'Wassily', the cantilever chairs B32 and B64 "Cesca" and the coffee table "Wassily".

He trained as a carpenter at the Bauhaus in Weimar and then worked in the office of Walter Gropius for several years before starting his own office. Breuer was admitted to the Association of German Architects in 1931. 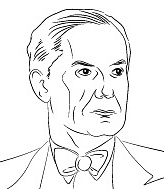 Walter Gropius (1883 - 1969) was a German architect and the founder of the Bauhaus. Today Gropius, along with Ludwig Mies van der Rohe and Le Corbusier, is one of the founders of modern architecture. 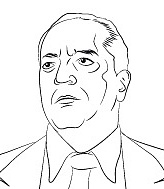 The Barcelona chair, Brno chair and of the cantilever chair are among his best known works in the field of furniture design. He also coined the expression "Less is more".

In addition to designing furniture, Mies van der Rohe is one of the most important modernist architects of the 20th century. From 1930-1032 he was the director of the Bauhaus Dessau. 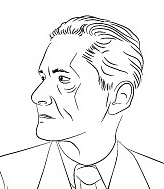 Wilhelm Wagenfeld (1900-1990) was a German product designer and former Bauhaus student. He is considered one of the pioneers of industrial design.

Wagenfeld's design is characterized by contemporary functionality. Some of his more than 600 designs, mainly in glass and metal, are produced as so-called design classics today. Many works are in the collections of renowned museums. 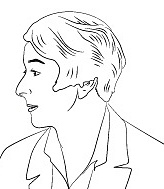 Eileen Gray (1878-1976) was an Irish interior designer and furniture designer. She is considered one of the most important designers of the early 20th Century.

Among her most popular designs is the "E 1027", a side table which in 1987 was included in the collection of the Museum of Modern Art.

Gray's work is comparable to other modern designers like Le Corbusier and Mies van der Rohe and her designs are highly coveted by collectors and furniture enthusiasts all over the world.

As the youngest child of the wealthy family of Eileen Gray studied painting at the prestigious Slade School of Fine Arts of University College London in Bloomsbury. But when her father died in 1900, Gray transferred to the Ecole Colarossi and the Academie Julian in Paris. Gray returned to London in 1905 where she learned the art of painting from the Japanese artist Seizo Sugawara. 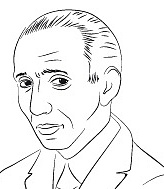 He was especially known for his furniture, which he made from tubular steel in the 1920's. Herbst was among the first designers to use this new material for furniture. One of the most famous examples of his work is the "Sandow's Chair", which he made in 1928. It conveys a minimalistic flair due to the simplicity of the design. 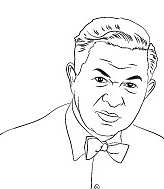 Arne Jacobsen (1902-1971) was a Danish architect and designer. He is perhaps best known for his contribution to the architectural functionalism and for his simple but effective chair designs.

He was born on 11 February 1902 in Copenhagen. He originally wanted to become a painter, but his father encouraged him to study architecture. After a short time as an apprentice to a bricklayer, Jacobsen was accepted at the Royal Danish Academy of Fine Arts. From 1924 to 1927 he studied under the famous architects Kay Fisker and Kaj Gottlob. 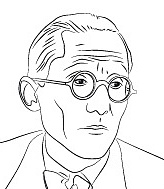 His most famous works in the field of furniture design, were the chair Basculant LC1, the LC2 armchair, the Sofa LC3, the LC4 chaise longue, the sofa LC5, the LC6 dining table and the chair LC7.

He is considered one of the most important architects and designers of the 20th century. The pseudonym Le Corbusier was inspired by his great-grandfather and his mentor Charles l'Eplattenier. 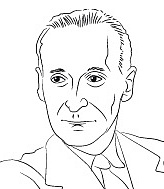 Robert Mallet-Stevens (1886 - 1945) was a French architect of the avant-garde and was active mainly in the late twenties and early thirties.

Buildings designed by him have a strongly cubist form image.

He studied from 1903-1906 at the Ecole Speciale d'Architecture in Paris. He presented his work in 1912 at the Salon d'Automne and got connected to the architects Réne Herbst and Pierre Chareau. 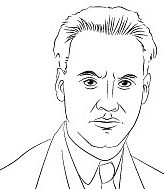 His style is classified as "New Objectivity", an art movement that emerged in the 1920s in Germany and is considered a counter-movement of Expressionism.

In 1926 he invented and designed the first cantilever chair. Stam returned to the Netherlands in 1934 and in 1939 he became the director of the Institute for Arts Education in Amsterdam. 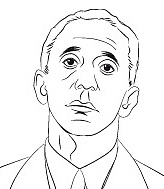 Jean-Michel Frank (1895-1941)was a french furniture designer, who was famous for his minimalistic and luxurious style.

A distant relative of Anne Frank, his family life was full of misfortune. His brothers died in World War I, leading to his father's suicide and his mother dying in an asylum.

He began his career as an interior designer in the early twenties, decorating the apartments and studios of Paris' art and literary scene, including Pierre Drieau la Rochelle, Nancy Cunard, Elsa Schiaparelli and Jean Cocteau. 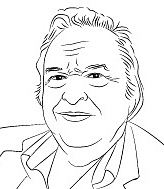 Eero Aarnio (1932) is an interior and furniture designer of Finnish origin. He is mostly known for his designs for plastic and fiberglass chairs as the famous Ball Chair.

He studied in Helsinki and founded in 1962 his own design office. He also achieved a lot of success with his Bubble Chair and Pastil Chair. 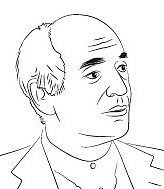 At the age of 15 he decided to visit his big brother in Detroit and start a drawing career. In 1937 he received a scholarship to the Cranbrook University of the Arts, where he met Walter Gropius and Ray and Charles Eames the first time.

1950, Bertoia was settled in Pennsylvania in order to establish his own studio. Particularly close cooperation he used with Hans and Florence Knoll. During this time he developed his most famous work, the so-called Bertoia Collection, including the Diamante chair. 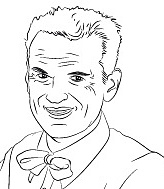 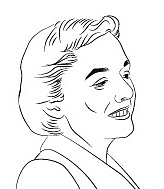 In 1941 Knoll received a Bachelor's degree in architecture at the Illinois Institute of Technology (formerly known as Armour Institute). Afterwords she briefly worked with the leaders of the Bauhaus-movement, Walter Gropius, Marcel Breuer and Wallace K. Harrison.

She married the furniture designer Hans Knoll in 1946 and together they started their own company, Knoll Associates. A factory was established in Pennsylvania and furniture dealers were carefully added for the company throughout the years. 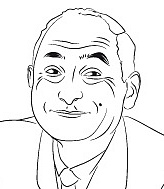 George Nelson studied architecture at Yale University from 1924 to 1928. He came to Rome from 1932 to 1934 for a scholarship at the American Academy. Afterwards he started his career as an editor for the magazine Architectural Forum. In the years that followed Nelson became one of the most influential design theorists in the United States.

He worked as the design director for Herman Miller in 1946, a position he held until 1972. In 1946 he founded an office for Industrial Design with Gordon Chadwick. George Nelson was also able to win Charles and Ray Eames as long-time designers for Herman Miller. 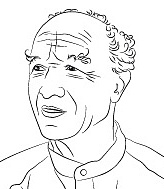 He was known for his sculpture and public works, and he also designed stage sets and several mass-produced lamps and furniture pieces, of which some are still manufactured and sold today.

From 1923 to 1926 he studied at Columbia University and the Leonardo da Vinci Art School, after which time he received the Guggenheim Fellowship. In 1929 Noguchi returned to New York. 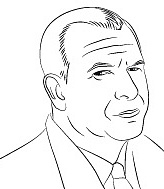 Eero Saarinen (1910 -1961) was a Finnish-American architect and industrial designer of the 20th Century.

Eliel Saarinen's father Gottlieb Saarinen was a famous architect in Finland. In 1923 the family emigrated to the United States.

From 1929 to 1930 Saarinen studied sculpture in Paris before majoring in architecture at Yale University. He then worked in the architectural office of his father and was made partner in 1941. Together with Charles Eames, he took part in a competition at the Museum of Modern Art, New York, where several of his designs, including the Organic Char won. 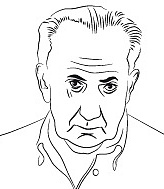 Gabriele Mucchi (1899-2002) was an Italian painter, graphic artist and architect. He is considered the co-founder of the "New Realism" (Nuovo Realismo) movement.

After graduating from high school Mucchi studied to be a civil engineer and architect at the University of Bologna from 1916 to 1923. After graduation, he worked in a construction company in Rome, an from 1927 on in an architectural firm in Milan. A stay in Berlin in the years 1928 to 1930 was followed by a lengthy stay in Paris from 1931 to 1934. In subsequent years, his name became known through an impressive wall paintings of the Italian borders. His studio became a meeting place for the anti-fascist group Corrente. 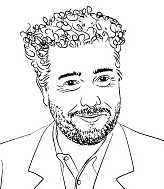 Philippe Starck (* 1949) is a French designer and architect.

He studied at the private Ecole Nissim de Camondo in Paris. Prior to his own business as an interior and product designer, he worked as an art director at Pierre Cardin. In 1980 he started his own business with the company "Starck Products" and was an internationally celebrated star designer.