Gerrit Thomas Rietveld (1888-1964) was a Dutch architect and designer. He became famous for his participation in the artist group De Stijl.

Rietveld started his career as a carpenter. He gained architectural knowledge through evening classes.

The artist group De Stijl was formed by an eponymous Dutch Journal of Visual Arts, edited by Theo van Doesburg and published between 1917 and 1932. Rietveld gained success through his Rietveld Schröder House (Utrecht) and the red and blue chair of 1918. Even at the Bauhaus, his ideas were taken up.

Some of the defining features of his work are the geometric shapes and a reduction to the primary colors yellow, red and blue. They are meant as an attempt to bring together visual arts, design and architecture.

Rietveld developed the red-blue chair in 1917 and three years later it was featured in the De Stijl magazine. However it was not until 1923 that the chair received its coloring in the primary colors and black.

The chair is made from a board that is divided into 13 rectangular blocks of wood, two planks and two boards. This is ideal for an industrial production.

His chairs were on exhibit at the documenta III in Kassel in the Department of Industrial Design in 1964, the year he died. 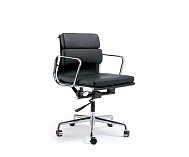 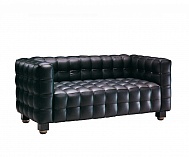